Like most of us, *Jane was anxious to return home after she had been hospitalized for a fall that left her nearly immobile, but she would require round-the-clock care and her doctor proposed an inpatient rehabilitation facility. Jane, a septuagenarian, was disappointed and her daughter, Rose, empathized. “My mom had been in (outpatient) rehab before and didn’t do well and didn’t like it and wanted to be home,” says Rose. Her priority was her mother’s comfort, and she advocated for her discharge, even though this meant she’d have to be her mother’s primary caregiver. But Rose knew she’d need help, and at her request, Jane’s doctor ordered home health care; Rose chose VNA.

Jane’s home health care team included a physical therapist, occupational therapist and speech therapist. It also included a nurse who checked on her medications and blood pressure as well as other assessments. “There was somebody at the house pretty much every day,” says Rose. “Occasionally they would overlap but it was OK because…my mom actually did quite well.”

With so many different caregivers involved, things potentially could get confusing, so Rose was pleased that one person from VNA coordinated everything.

In order to keep Jane safely at home, her VNA Home Health team had to make recommendations for certain things in her house, including railings along her bed and throughout her home; the importance of such measures cannot be overestimated as falls are the number one cause for injury and hospital visits for people 65 years and older. They also recommended a high seat on the toilet and bars around it for balance .

It didn’t take long for Rose to confirm she helped her mother make the right decision to convalesce at home instead of an inpatient rehabilitation facility. “It was better being at home because the therapist was able to work with her in the home and see how she got around the house using the walker. She helped her navigate the furniture and also took her outside so she could walk around,” says Rose.

Initially, Jane couldn’t be left alone, which meant that even with VNA home health care, there would be times when Rose would be the only person to provide help for her mother. But thankfully, Jane’s dedicated VNA team aided Rose with this, something she greatly appreciated. “It wasn’t just that they were helping her, they were educating me as well…the therapist showed me the exercises so that in between the therapy sessions with the therapist I could work on the exercises with her,” says Rose. “The nurses would show me how she should be using the walker, how she should be standing, what to look out for as far as what kind of shoes she should be wearing to help with her mobility and to help decrease falls,” says Rose.

As weeks turned into months and Jane’s health improved, the home health team decreased the frequency of their visits until it was down to once a week and eventually none at all. “They said, ‘She’s doing well enough, we don’t have to keep coming,’ so no one comes at all now,” says Rose.

Indeed, Jane’s mobility improved so much that it impressed her physicians. “We were told that she would have deficits forever and they were very surprised at how well she did,” says Rose. “She still has health issues, orthopedic issues and things like that, but as far as balance and mobility and walking, she’s doing much better. She doesn’t even use the walker all the time now… she can get around the house and take the dog outside without the walker, and she’s doing well.”

She can also do things like get dressed, a small miracle. “I don’t have to make sure she dresses, she does it all by herself. It’s amazing,” says Rose with a big smile on her face.

PrevPreviousJuly is Ultraviolet (UV) Safety Awareness Month – Time to Put on Your Sunglasses!
NextEating Healthy This Summer is DELICIOUS!Next 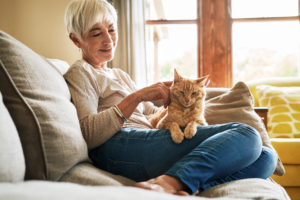